The impending release of the newest installment of the Star Wars saga provides a perfect backdrop for understanding the clusterfuck that we find ourselves eye-to-eye with everyday attempting to decode current American politics. If you find yourself as one of the people thinking, “I don’t get what the big deal is with Star Wars,” I’ll wager dollars-to-donuts that you jumped in somewhere in the middle. As with all good stories the beauty, the truth, lies in the journey. Beginning, middle, and end. No matter what anyone tries to tell you, Star Wars does not take place “A long time ago, in a galaxy far far away…” Star Wars does not just tell a story, it tells THE story. It tells us the story of what is going on around us, inside us, every minute of every day. If you don’t get it, go back to the beginning, you will. Pay little attention to the numbering of the Episodes, this is not the order you’re looking for. The proper order of the Star Wars Films is as follows: 4, 5, 1, 2, 3, Rouge 1, 6, 7, 8, 9. This is a variation of the “Machete Order”. 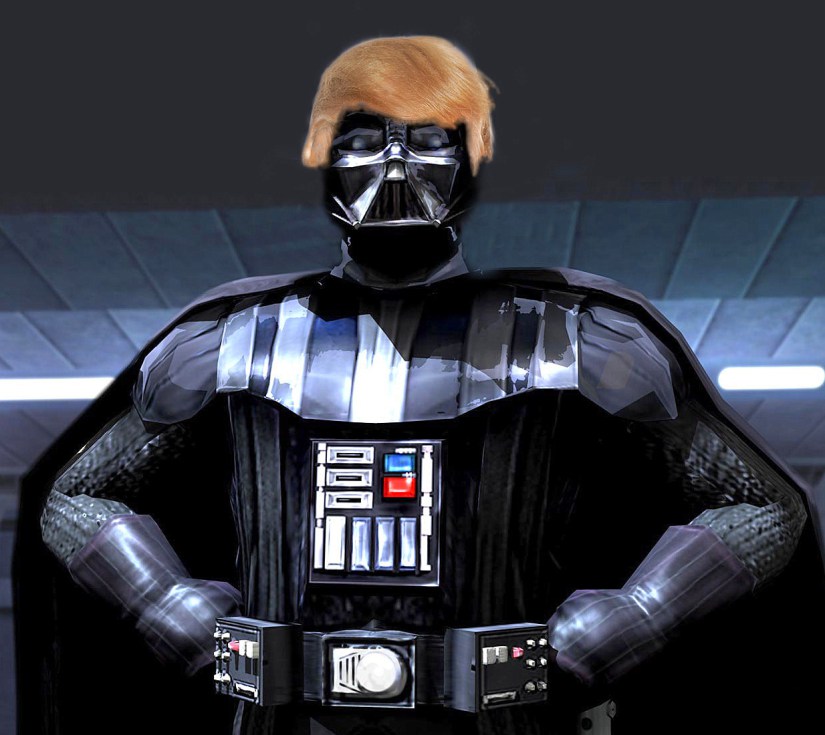 The Star Wars saga began in 1977. Any true comprehension must begin there as well. Star Wars Episode IV: A New Hope comes first. This is by far the most important part. Stop reading here, go watch it, and you will still be the better for it. The entire Star Wars empire stems from the power of the original film. If you love Star Wars, Harry Potter, or any of the epics, read Joseph Campbell particularly Hero with 1,000 Faces. It’s all there. The second film in the Star Wars story is the second film to be released Episode V: The Empire Strikes Back. It is crucial not to spoil the reveal at the end of Empire by placing any films other than ANH before it. Between The Empire Strikes Back and Episode VI: The Return of the Jedi, comes the entire Prequel Quadrilogy, sequentially. Episode I: The Phantom Menace, Episode II: Attack of the Clones, Episode III: Revenge of the Sith, plus Rogue One: A Star Wars Story. Then come the rest of the films, also sequentially. Episode VI: Return of the Jedi, Episode VII: The Force Awakens, Episode VIII: The Last Jedi.

The order of the films is important, but only to properly portray the order of the story. Everything stems from the original film. A New Hope may be the purest telling of the archetypal hero myth that has ever been created for film. Everything else is a prologue or an epilogue to the story of the Desert Orphan who befriended the Mystic, the Rogue, and the Princess on the road to spiritual enlightenment that allowed him to tap into his inner life-force, the life-force of all living things, and save his friends from destruction at the hands of the forces of evil.

Early in the story, we learn that the Jedi are the self-proclaimed champions of peace and justice, and later on that they have declared their sworn enemies, the distressingly similar Sith, to be the forces of Evil. We also learn that the Jedi believe, again incorrectly, that only the Sith deal in absolutes. This wrong-headed belief proves to be the crux of the undoing for the Jedi who, like the truest of Hubrists, are torn down never to return as they were. As the story unfolds, we find the Jedi actually have far more and more asinine rules than their counterparts. The Sith believe that power is to be desired and comes from embracing all human emotion, especially the dark. Fear leads to anger, anger leads to hate, and hate will make you powerful. The Jedi believe that only by denying all emotion can they steel themselves against the darkness that resides in all of us. Alas, love, the greatest human emotion of them all, is what leads Luke Skywalker’s father Anakin down the dark path. Clinging too closely to those we love brings a tragic sense of loss when we outlive them. Loss leads to sadness, sadness leads to despair, and despair leads to rage.

Star Wars teaches us that love and hate may not be true opposites. Love is the greatest of all human emotions, it is the best thing that we can do. Love can be for a single person, or it can be for all of humanity, for all living things, for life itself, for things that are not even alive. As such, love is far too grand to have an exact opposite. To imagine a person who hates everything, every person, every animal, every food, is to immediately become sad. Hate is not a big enough emotion, not a big enough concept to fully mirror love. Hate can only mirror the focused aspect of love, the love for one person, or one thing, one group, one idea. Hate can bring a person to do terrible terrible things, but like a cancer, when it grows too large it collapses under its own weight. Hate that grows too large brings us back to loss, to sadness, to despair. It is despair that can cause a person to cross the bridge to rage. Rage is the foil for the unfocused aspect of love. The love for all things that can fill a person’s heart. Perhaps this is compassion. It is only rage that a person can feel for everything and everyone. Rage is what person feels when they have lost too much, it is what they can do when they no longer care who suffers. We rage against anyone else, everyone else, against ourselves, who cares?

Rage is the true dark monster that lives at the end of the dark path inside of us all. And rage is only ever a few short steps from love. To love someone is to share their pain. Not to naively attempt to shield them from it, but feel their pain with them and allow them to feel ours. But what happens when we are too selfless? What happens when we attempt to be strong, to allow someone we love to unburden their pain onto us, but you keep too much of our own for to ourself? And then they leave us. Something, someone, the world, takes them from us. Suddenly we are alone, with our pain and theirs and no one to share it with. What happens when that pain is too great? What if there is no one to blame? To hate?

This is the story of Anakin Skywalker, of how he becomes Darth Vader. It is the story of Washington bureaucrats and internet blog-tivists. It is what happens when we get too attached to our ideas that we can’t stand to lose them. It is what happens when we don’t acknowledge our fears that the other side may be right. That maybe we had it wrong all along. Maybe I don’t understand the budget. Maybe we can’t just lower taxes. Maybe they have a point about immigration or abortion, something I didn’t think about. Fear leads to anger. NO! They don’t have it right, I have it right! Anger leads to hate. Conservatives are Nazis and Liberals are destroying America! But only the pain of loss, the despair of getting your hopes up and then having them dashed can take you across the bridge to soul-crushing rage. WE LOST?!? They shot JFK?!? They shot Malcom?!? They shot Martin?!? Nixon won?!? He resigned?!? Carter won?!? Reagan won?!? Bush won?!? Clinton won?!? Another Bush won?!? They blew up the Towers?!? Obama Won?!? The black guy?!? Another Clinton’s gonna win?!? A woman?!? She lost?!? Trump won?!? They’re ruining my country!! The economy is in the shitter!! It’s all the immigrants fault!! Fuck muslims!! No fuck you!! Fuck racists!! Fuck rich people!! Fuck poor people!! Fuck everybody!!

Holy shit, SLOW DOWN! There are four more movies.

This is strife, this is conflict, this is drama, this is suffering. This is when Luke Skywalker reclaims the path of righteousness by hitting puberty and discovering emotional depth. He learns the ability to feel more than one thing, to think more than one thing, at the same time. He saves his father by allowing Anakin to reconcile the right that he did with the wrong; to die at peace with the fact that we are all the yin and the yang. The old school Jedi and the Sith both had it right, and they both had it wrong, but at least the lines were clearly drawn. Cold-hearted detachment vs. Hot-blooded passion. Both are necessary, but either will lead to disaster without the other. We cannot become too attached to our ideas, or our identities, but neither can we hold them too loosely. We should hold the most important things to use closely, but never so closely that we could not bear to lose them. Death is an inevitable part of life, we must be ready for it.

America could use some clarity and balance right now. What is the Right? What is the Left? What do they really stand for? Are those my only two options? Do I have to choose one or the other? Take abortion, for instance. Who is Pro-life? Who is Pro-choice? What about guns? Is the answer the same? We like to yell and scream at each other, but at the end of the day I don’t think that very many of us have the same answer for both. I think most of us take one from column-A and one from column-B. I think Episode VIII and its “Grey Jedi”, half-light, half-dark, might get here just in time to remind us all that the answer isn’t one or the other, it’s both. Liberals are out of their fucking minds. Completely insane, bat shit crazy. If you ask some of them about gender pronouns. On the other hand, their stance on student loans makes a lot of sense. Conservatives are unhinged. Corporate driven, war-machine building, hillbilly psychopaths. Just ask a few of the super, super rich ones their opinion on corporate personhood. That is, until we need soldiers.

The way to fix our problems cannot be found on the Left or the Right. It requires both. Some light, some dark. Some yin, some yang. The calm is at the center of the storm. The path to prosperity lies along the knife-edge between good and evil. What a mess we’ve made of having two right answers.